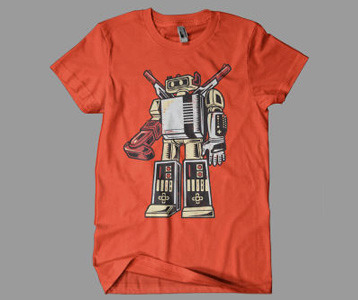 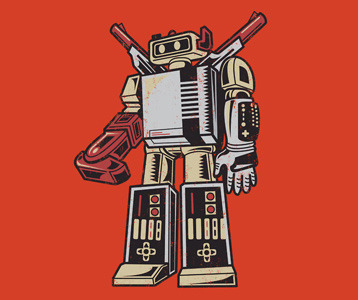 What if one of your closest friends from your childhood returned in robot form to protect you from playing anymore bad video games and to remind you of a system that gave birth to more than a handful of legendary titles?  Of course, we’re talking about the classic Nintendo Entertainment System, a once trusted companion for many of us that delivered classics like Zelda, Super Mario Bros., Metroid, Duck Hunt, etc.  This Nintendo Robot shirt displays a character made up of Nintendo controllers, light guns and the NES console itself.  The Nestron t-shirt is a fun tribute to the NES.  I especially like the Power Glove for the arm.  The glove itself may not have worked well as a controller, but it was still awesome in theory and provided a glimpse into the future (think Wiimote).