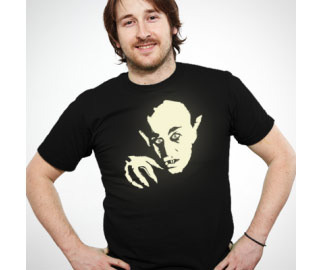 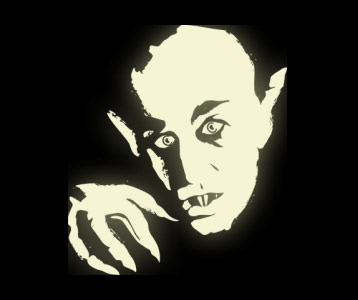 The Nosferatu vampire movie premiered in 1922 and was directed by F.W. Murnau, one of the most influential German film directors of the silent era.  Nosferatu was based on Bram Stoker’s Dracula novel, but the studio could not secure the rights to the story, so the names and other details had to be changed.  For instance, “vampire” became “Nosferatu” and “Count Dracula” became “Count Orlok”.  Despite these changes, Bram Stoker’s widow still sued the studio for copyright infringement and won the lawsuit.  As a result, all prints of the movie were ordered to be destroyed but bootleg copies survived, allowing millions of future viewers to become mesmerized by actor Max Schreck as Count Orlok.  If you find this big screen vampire to be terrifyingly creepy, then get this Count Orlok Nosferatu t-shirt today.  It’s perfect for a journey to Orlok’s castle in the Carpathian Mountain town of Transylvania.

The movie, represented by this Nosferatu tee,  tells the story of Thomas Hutter, a real estate agent of sorts who lives in the fictitious city of Wisborg, Germany.  His employer, Knock, sends him to Transylvania to meet with a client named Orlok who wants to purchase a house across the street from Hutter’s.  On his journey, Hutter spends the night at an inn where he finds a book, The Book of Vampires, which he reads before falling asleep.  In the morning, he makes his way through the mountains aboard a coach, whose driver refuses to take him all the way to Orlok’s castle because nightfall is quickly approaching.  A sinister looking dark coach then arrives, whose driver (Count Orlok in disguise) takes Hutter the rest of the way.

After he arrives at the castle, Thomas Hutter meets Count Orlok (Max Schreck), who is depicted on this Nosferatu shirt.  Orlok feeds him and then Hutter falls asleep in the parlor.  During the night, Orlok signs the papers to purchase the home and also admires Hutter’s wife’s neck in a picture that Hutter brought. Hutter wakes up with two puncture marks on his neck, but reasons that they are from mosquitoes during the night.  He then reexamines The Book of Vampires that he took from the inn and begins to suspect that Count Orlok is actually Nosferatu, the “Bird of Death”.  Soon, Orlok’s true identity is revealed and the deadly vampire quickly departs from the castle toward his new home and Hutter’s wife.  Hutter escapes from the castle and makes his way back home to stop Orlok, but not before the town finds itself in a state of panic, believing that the recent murders caused by the vampire Nosferatu (Count Orlok) were actually caused by the plague.  Will Hutter and the townsfolk be able to stop the vampire’s rampage of death?

The vampire Nosferatu was played by German stage actor Max Schreck.  The character’s gauntly features were made to look like a rat that was known to carry the plague.  This explains the long fingers and nails, the close front teeth, the pointy ears, and the sickly facial features.  If this classic vampire gives you the creeps, then get this Count Orlok Max Schreck Nosferatu t-shirt to freak your friends out too.

This t-shirt was discovered at AllPosters.