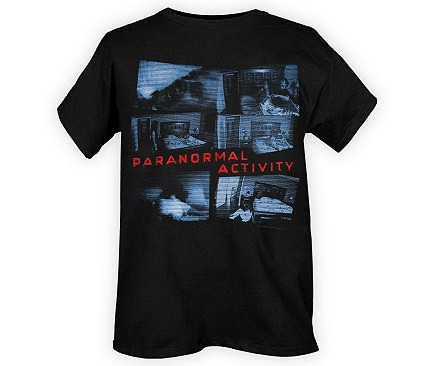 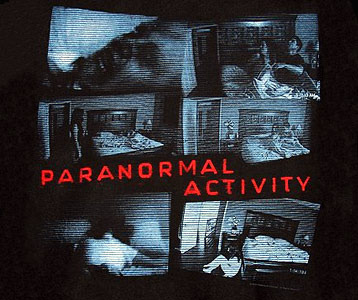 Another killer horror movie has graced us with a sequel.  Don’t sigh yet!  I am fully aware that most sequels don’t compare to the original but this one is actually great.  Paranormal Activity 2 is just as creepy, if not more so than the original.  Celebrate the success of this hit and its predecessor with your very own Paranormal Activity t-shirt.

Part of the success of the original film can be attributed to a large number of audience members believing that the movie was showing real events.  The movie generated a lot of buzz prior to its release because many people wondered, “Is Paranormal Activity real footage?”  Message boards and web sites were overrun by people wanting to know more about the Paranormal Activity true story.  Through our sister web site, ChasingtheFrog.com, where we research movies based on actual events, we received emails from visitors asking, “Is Paranormal Activity based on a true story?”  Unfortunately, Paranormal Activity is not real.  The film is fictional and was written and directed by Oren Peli.  Like The Blair Witch Project and Cloverfield, it is presented to the audience as “found footage” by way of a camera set up by the couple in the movie.  Promote this seemingly real movie with this Paranormal Activity shirt that is perfect for the horror movie buff in your life.

Paranormal Activity was made in 2007 but widely released in 2009, with a follow-up film in 2010.  Viewers follow Katie, a woman trying to cope with a demonic presence that has followed her around her whole life.  It disrupts her sleep and on occasion even possesses her.  She tries to get help from ghost experts in order to find a solution to her problem, but things only continue to get worse as the entity seems to be getting antagonized by her live-in boyfriend Micah.  After the suspenseful demise of Micah at the end of the original, we are left wanting more.  Now we have it and it was well worth the short wait.  Similar to The Blair Witch Project, the “found footage” video camera style from the first film has carried on and continues to leave a lasting impression in the sequel.  This Paranormal Activity tee is the perfect piece of clothing to wear to the theater.

These movies just go to show that you can create a masterpiece with a small budget and the right buzz.  Grossing nearly $108 million domestically in the U.S. and $194 million worldwide, the original Paranormal Activity movie is one of the most profitable films ever released, with regard to return investment.  Similar to Blair Witch, getting potential audience members wondering, “Is Paranormal Activity real?” only helped to draw them to the theater.  Who wouldn’t want to watch a real poltergeist in action?  Is Paranormal Activity a true story is a question that might seem obvious to some, but even the slightest bit of doubt generates curiosity.  Whether you enjoyed the original, the sequel, or can’t figure out which movie you prefer, grab this sinister looking Paranormal Activity t-shirt.  Perhaps it will inspire you to set up your own camera to catch the ghost that’s haunting you.