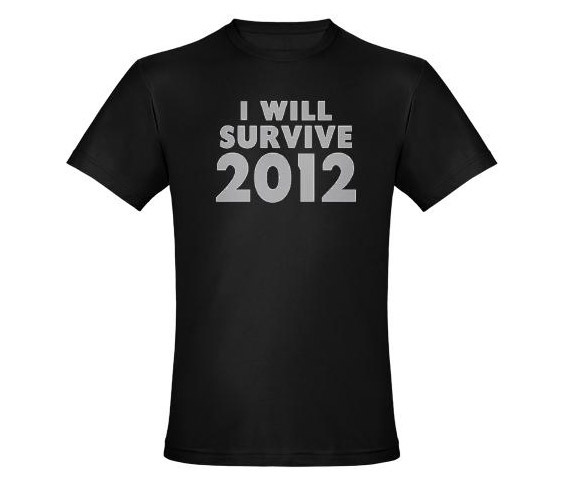 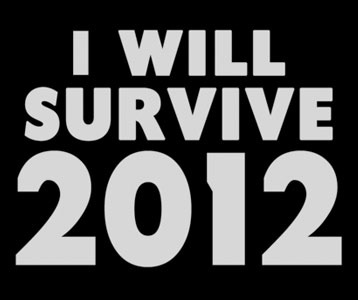 Sorry Gloria Gaynor, there are more important things to sing about at the moment than surviving the men who've wronged you.  Like this tee says, it is all about surviving 2012 now.  If you are ready to spread the word, then get this 2012 t-shirt today.

The movie 2012 starring John Cusack and Amanda Peet riled up audiences by introducing them to a bone chilling end of the world scenario.  What makes this film so nerve wracking?  It is based on the real life 5,125 year long Mayan Long Count calendar that comes to an end in December of 2012, particularly between 11 — 11 p.m. universal time on December 21, 2012.  Although scholars do not believe there is anything to worry about, with the looming date just being the end of a Mayan cycle of time, many people in the movie were sent into a panic anyway.  Terrified citizens from around the globe wrote about their concerns to priests and scholars alike, with fears that their children would never be able to grow up.  While it may seem ludicrous to you, you don’t know for sure until the day arrives.

What would you do if you knew when the Earth was going to implode and you were potentially going to die?  I wouldn't go out without a fight.  After all, the people in the movie made it onto special survival vessels.  If you are picturing the same thing for the end of days or if you just want to join in on the hoopla, then grab this I Will Survive 2012 t-shirt and show everyone that you intend to carry on!