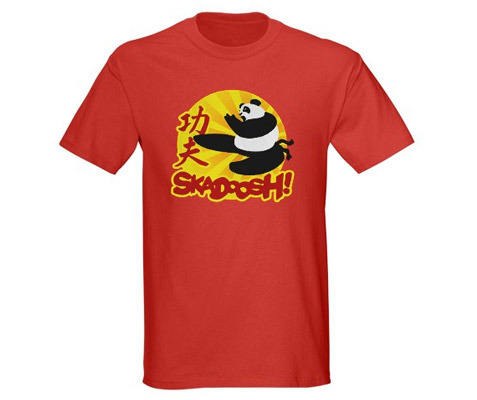 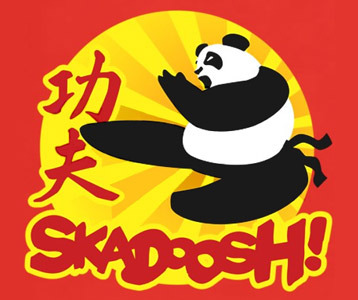 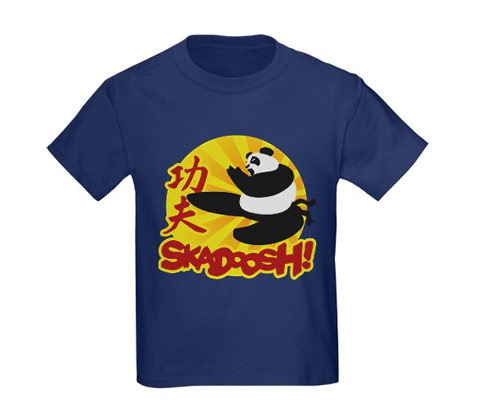 Everybody was Kung Fu fighting... Hear the tune in your head too?  This Po Kung Fu Panda Skadoosh t-shirt is for fans who loved watching Po do his thing and are anxious to see him do it again in the new movie Kung Fu Panda 2.  Hi-ya!

In 2008, Po (voiced by Jack Black) found his chubby fuzzy self trading in his quiet life in the Valley of Peace where he worked at his family’s restaurant for that of a Tai Lung booty-kicking extreme martial artist.  After he and his teacher Shifu (Dustin Hoffman) discover that he can be motivated by food, they realize anything is possible.   Perhaps Oogway picked the right guy to become the Dragon Warrior and defend the scroll after all.  Show your support for Po with this Kung Fu Panda t-shirt that will hopefully motivate you to master your talents as well.

Despite his less than stellar physique, Po is able to do anything he puts his mind to, often by utilizing his extra weight.  After the kung fu masters known as the Furious Five, including Monkey (Jackie Chan), Tigress (Angelina Jolie), Mantis (Seth Rogen), Crane (David Cross) and Viper (Lucy Liu), are defeated by the evildoer Tai Lung, it is panda Po to the rescue.  Doubted by all from the start, he earns the respect of his fellow valley protectors.

Now in 2011, he is faced with a new challenge and surrounded by a few new faces.  Enough said though…I’m not about to spoil the surprise.  Grab a Po Kung Fu Panda Skadoosh shirt to show that first impressions aren’t always right and everyone may have a hidden talent up their sleeve.  This tee kicks butt, skadoosh!