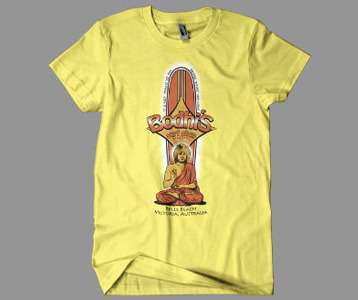 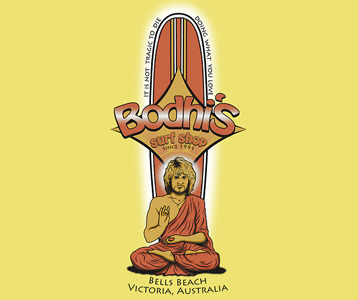 I can remember sitting on my parent’s couch with my friends in the early 1990s watching Kathryn Bigelow’s surfing action movie Point Break on VHS.  It wasn’t the first time I’d seen it, but it was the first time I realized that there were other passionate fans out there than just me.  This Point Break Bodhi shirt features the movie’s most charismatic character, who is the leader of a gang of surfers who may also be responsible for a string of bang robberies.  Enter Johnny Utah (Keanu Reeves); a former Ohio State quarterback turned FBI Agent.  In order to take down the surfing bandits, Johnny befriends a surfer girl named Tyler Endicott (Lori Petty) and goes undercover in search of the surfing bank robbers.  The criminals have been dubbed the “Ex-Presidents” due to the masks they wear which resemble former US Presidents.  This Bodhi's Surf Shop Point Break t-shirt would have definitely helped Johnny get in tight with the surfers.

In the movie’s climactic moment, Johnny catches up with Bodhi (Patrick Swayze) during the 50 Year Swell (or 50 Year Storm) that only happens twice a century.  After a fist fight, Johnny manages to handcuff Bodhi to himself.  Realizing that Bodhi likely won’t survive the swell, he lets him go to fulfill his dream of riding the perilous wave.  This Point Break Bodhi t-shirt imagines him having survived the 50 year swell and having since opened a surf shop in the same area.  After all, it’s certainly a possibility.