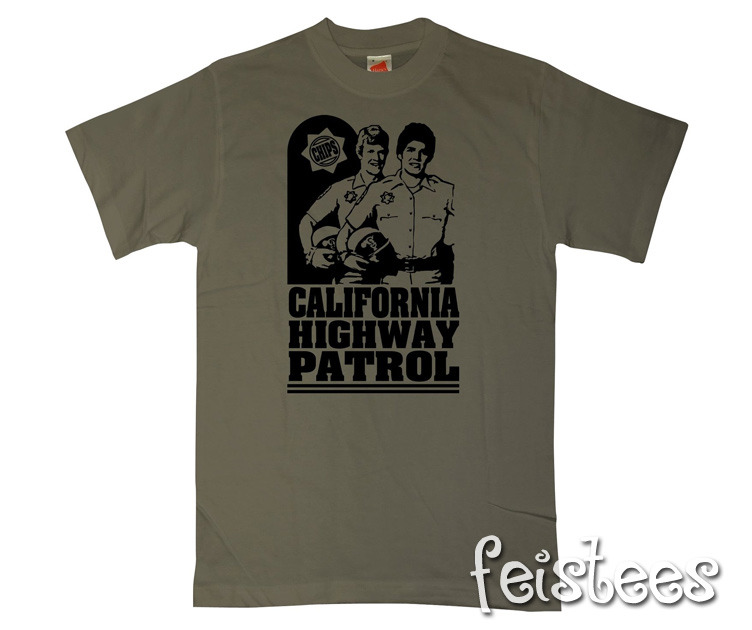 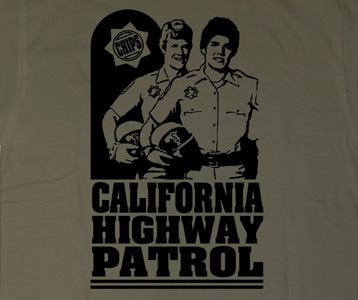 Originally airing on NBC from September 1977 to June 1983, the CHiPs TV show is a lightweight action crime drama that is centered around two California Highway Patrol (CHP) motorcycle officers, Francis “Frank” Poncherello (Erik Estrada) and Jonathan “Jon” Baker (Larry Wilcox).  Riding as a team, the two encounter freeway pileups and are involved in high speed chases in nearly every episode.  As a kid growing up in the 1980s, these exciting storylines that were often peppered with elements of comedy kept me glued to the screen.  Each week from the safety of my couch, I had the privilege of riding along with officers Poncherello and Baker, featured here on this Ponch and Jon Chips t-shirt that is perfect for any fan of the TV series.

In preparing to write my article about this tee, I began to wonder why I had been so addicted to the CHiPs TV show, first in the early 80s and later by way of reruns.  What was it about this TV show that made it different from most others on the air today?  It didn’t take long to figure out the answer.

Each episode of CHiPs delivers the same excitement that is felt when we approach a real life accident scene.  We watch the show as rubberneckers from our couches, with the comfort of knowing that in this case we’re supposed to be slowing down to stare at the onscreen pileups.  Sure, it also doesn’t hurt that the characters represented on this Chips Ponch and Jon shirt are attractive ladies men who embody much of the style and coolness that was contagious in the early 1980s.  The characters on this Chips tee are by no means “doughnut cops”.

Putting Ponch and Jon on motorcycles allowed the producers to play this up even further by implying that these two officers are too cool for a police car.  Just take a look at the characters on the show who are confined to patrol cars, they are usually a bit dorky and slightly overweight.  Placing Frank Poncherello and Jonathan Baker on motorcycles not only makes them stand out, it also makes them much more vulnerable out on the highway, which adds to the excitement of the TV show.  They are exposed and are often at the mercy of the criminals they are chasing, who could easily run them down.  Celebrate the show's 139 episodes and temper your own addiction with this Ponch and Jon Chips t-shirt.  Who knows, it just might help you to score a few retro ladies yourself.