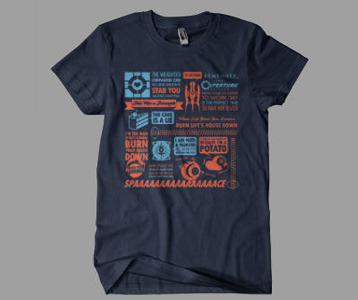 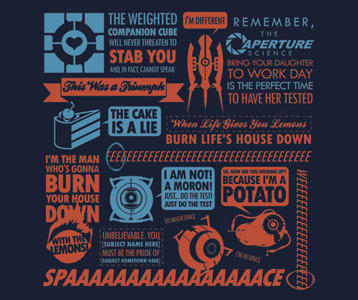 Whether you've had trouble parting with your companion cube or you've just recently faced the harsh reality that the cake is a lie, this Portal Collage t-shirt displays quotes that will remind you of the video game's most memorable moments.  The puzzle-platform game requires players to teleport their character using the handheld portal device that can open up inter-spacial portals between two flat planes.  The video game unfolds inside of the Aperture Science Enrichment Center, where an artificial intelligence named GLaDOS (Genetic Lifeform and Disk Operating System) challenges players.  Just like the game itself, this Portal Quotes shirt also deserves to be praised for its originality, as it encompasses many of the games key elements and quotes.