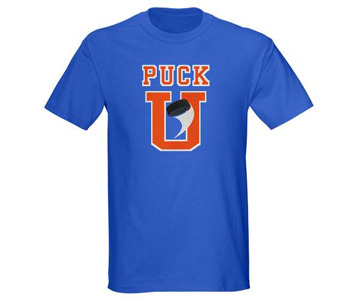 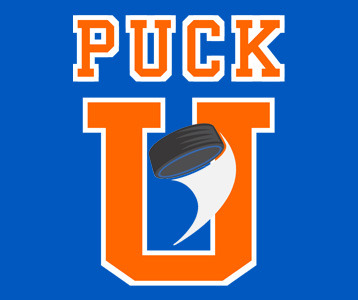 It’s no secret that Kevin Smith is a hockey fan and likes to wear hockey jerseys, nearly all the time in fact.  To announce his upcoming movie Hit Somebody at the Sundance Film Festival, he arrived dressed in a Puck U Hockey Jersey that featured a design similar to the one displayed on the shirt shown here.  The movie, which is based on the Warren Zevon song “Hit Somebody,” tells the story of a farm boy who dreams of becoming a professional hockey player.  Despite his lack of talent with the puck, the character discovers that he has a talent for fighting, which instantly makes him a fan favorite no matter which team he is on.  The movie will span thirty years of the young man’s life, from 1951 to 1981.   This Puck U shirt is a funny tribute to Kevin Smith, the Hit Somebody movie and hockey in general, or you could just look at it as being a Puck University t-shirt, where all the great hockey players graduate from ;).