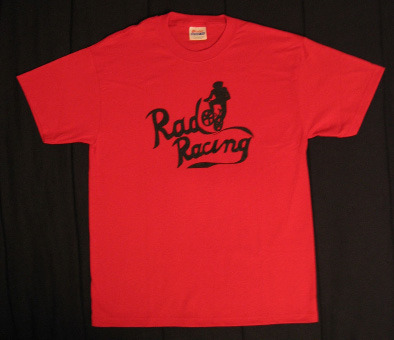 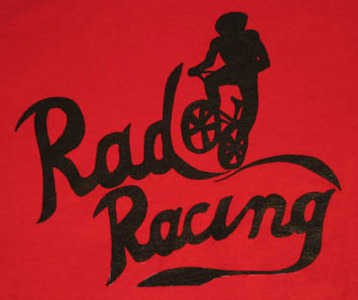 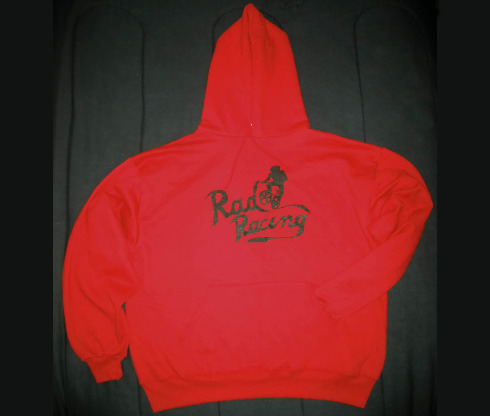 In the spring of 1986, the BMX movie Rad peddled its way into theaters, riding on the crest of the BMX craze that had been sweeping over the country.  Sure, most people didn’t flock to see the film (it grossed only $2 million), but for us loyal BMX riders, it was the must see movie of the moment, bigger than any summer blockbuster that could follow.  This Rad Racing t-shirt is a spot on replica of the tees that Cru’s team creates and wears in the movie.

The film tells the story of small town BMX rider Cru Jones (Bill Allen), who in opposition to his mother’s wishes, tries out and qualifies to race Helltrack against nationally sponsored riders like Bart Taylor, who is portrayed by gold medal winning Olympic gymnast Bart Connor.  Since its release, the film has gone on to reach cult status in BMX circles, which is all the more reason to own this replica Rad movie shirt.  I was nine-years-old when I saw it in theaters and the BMX riders on the big screen seemed larger than life.  For me, watching the film was like observing bicycling magicians, whose wands were chrome handlebars with rubber grips.

Rad was the last movie that I can remember my dad taking me to see.  Sure, I watched hundreds of other films with my dad, but they were usually viewed at home or in the company of my mom.  This was not the case with the BMX movie Rad.  My dad took me, my brother, his friend and his friend’s two cousins to see the film.  My father’s interest in the movie stemmed from the fact that my brother raced BMX and was ranked second in the state in the novice division.  Ironically, he was sponsored by a local bike shop under the name The Rad Pack, though they didn’t have cool racing tees like the Rad movie shirts featured in the film and replicated here.  My father acted as my brother’s pit crew, oiling his chain between races, checking the air pressure in his tires, and cheering him on to victory.  My parents still have several cabinets full of his trophies.

If you are curious, I raced too…once.  I took second place out of three people.  Let’s just say that I enjoyed the freestyle aspect of BMX better than racing.  In any case, the movie has always been part of my extreme sports trifecta that also includes the rollerblade movie Airborne (1993) and the ski flick Aspen Extreme (1993).  If you’re a fan of BMX or 80s movies in general, don’t hesitate to pick up this replica Cru Jones Rad Racing t-shirt.  It might not give you the ability to bicycle boogie, do a back flip or conquer Helltrack, but like the movie, it will inspire you to peddle a little bit harder the next time you face a challenge or go for a ride on your bike.

This t-shirt was designed by RadTShirts and discovered at 80stees.