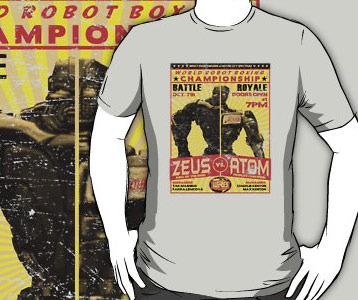 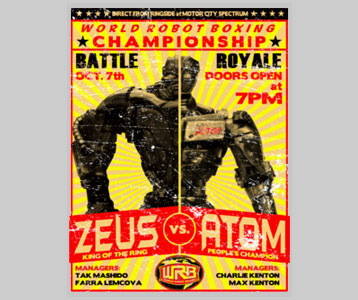 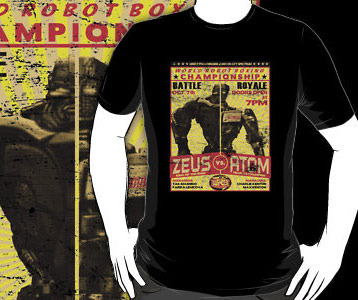 Imagine life-size Rock ‘em Sock ‘em Robots.  That’s the basic concept for the Hugh Jackman movie Real Steel, which takes place in the year 2020 when human boxers have been replaced by robots.  A former human boxer named Charlie Kenton owns one of these robots.  After discovering that he has an eleven-year-old son named Max (Dakota Goyo), Charlie and Max struggle to make ends meet as they attempt to rise to the top of the robot boxing circuit.  The problem is that their robot, Atom, is an obsolete Generation 2 sparring robot that was built back in 2014.  This Real Steel shirt promotes the movie’s final match between Charlie’s Atom bot and the WRB (World Robot Boxing) Champion robot, Zeus, designed and operated by genius Tak Mashido.  Atom vs. Zeus might seem like a lopsided bout, but Atom’s shadow feature gives him the ability to follow Charlie’s movement, allowing Charlie’s own experience as a boxer translate directly to Atom.