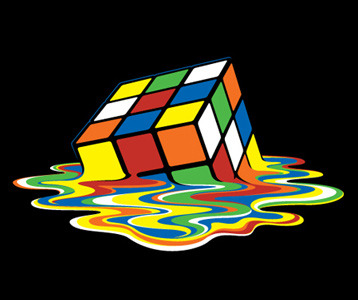 Do you ever just look around your room and wonder where something came from, who invented it or how long it has been around?  I do.  Today I noticed my Rubik’s Cube (unsolved of course) on my bookcase shelf and decided to look it up.  I was surprised to find out that this year actually marks the 30th anniversary of the classic 3x3x3 game cube!  In light of that fact, I am posting this Rubik’s Cube t-shirt since it has added countless hours of entertainment…and frustration to my life.  Get this tee if the toy has done the same for you.

The Rubik’s Cube is a 3D toy puzzle traditionally made up of 3x3x3 rows of little cubes.  The cubes are colored in red, orange, yellow, green, blue and white depending on each cube’s placement in the puzzle.  The player’s task is to manipulate the cubes through the internal pivot mechanism, so that each face of the larger game cube shows one solid color.  This tedious toy was invented in Hungary in 1974 by Erno Rubik.  However, it was not distributed to the masses until 1980.  Other similar problem solving toys have since been invented in a variety of shapes and larger sizes.

You don’t need video games, MP3 players or high definition TVs to have fun.  Remind everyone with this Rubik’s Cube t-shirt that you can have fun with the simple things in life like this ingenious toy puzzle game.

This t-shirt was discovered at TV Store Online.