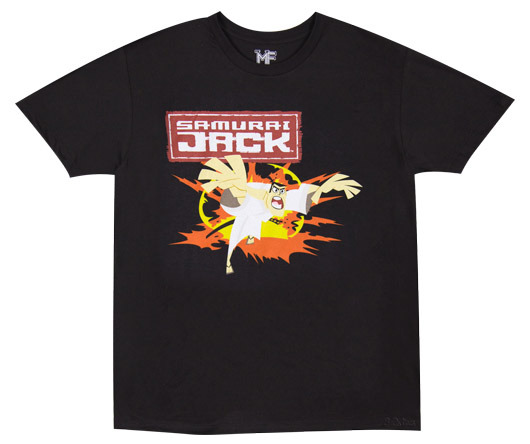 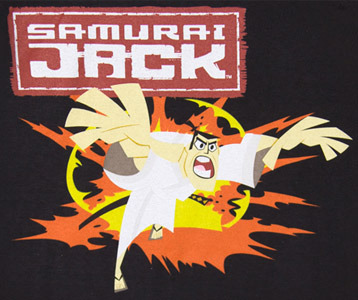 The cartoon Samurai Jack aired over four seasons on the Cartoon Network from 2001 until 2004, with an initial order of fifty-two episodes.  Created by Russian animator Genndy Tartakovsky (Dexter’s Laboratory, Star Wars: Clone Wars, Sym-Bionic Titan), the TV show was touted for its highly rendered, outline-free, masking-based animation, in addition to its appealing cinematic style and pacing.  The Samurai Jack cartoon featured here on this t-shirt also holds the significance of being the first Cartoon Network original series (not including those that comprised the Cartoon Cartoons block that aired at the time).  It spawned several video games and a Samurai Jack comic book.  The animated series reappeared on the network in 2008 in the form of reruns, and it has garnered significant hype recently with word of a feature film that is to be co-produced by J.J. Abrams and distributed by Paramount Pictures.  If you can’t wait for the movie, this Samurai Jack t-shirt will hopefully help hold you over.

Cartoon Network’s Samurai Jack series tells the story of Jack, a time-displaced warrior who is on a quest to find a way to travel back in time in order to battle the demon Aku, who banished him to the future.  Part of the attraction of the Samurai Jack TV show is its battle scenes, which often resemble those from live-action Samurai films.  The cartoon’s creators avoided censorship issues by having Jack battle robots that leak oil when struck and monsters and aliens that bleed slime.  Hopefully, the Samurai Jack movie will finish the story that the series started, offering fans long-awaited closure.  For example, will we ever learn the character’s real name (“Jack” is a nickname given to him by people he encounters in the future)?  Regardless, we can still celebrate the character and the cartoon with one of these cartoon Samurai Jack shirts.  These attractive logo tees are the perfect way to get others interested in the action-packed Cartoon Network TV show.

This t-shirt was discovered at 80sTees.