The Sandlot You're Killing Me Smalls shirt 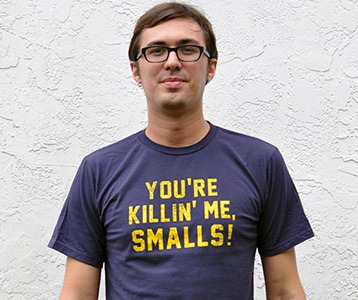 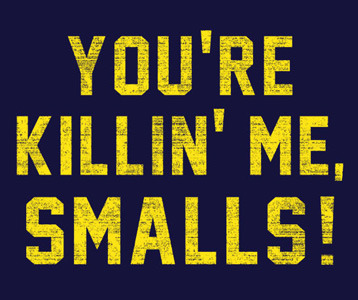 Spring is here and summer is only a bound behind.  As a child, I used to spend summers going on adventures through the woods, biking around the neighborhood, and swinging from the monkey bars.  Now, it seems that kids spend their summer playing video games, watching TV and avoiding fresh air at all costs.  That is why I enjoy the movie The Sandlot.  It reminds me of how summers should be spent, outside and playing baseball at the local diamond.  Catch your own Sandlot You’re Killing Me Smalls t-shirt if it reminds you of the same.

The 1993 movie Sandlot is about a boy named Scotty Smalls who moves into a new neighborhood and wants to make friends.  Although he isn’t sporty, he decides to try to join the guys at the local baseball field where they play daily.  He is welcomed by his peers, but a few pieces of general kid-dom knowledge appear to be missing.  The Sandlot You’re Killing Me Smalls shirt displayed here depicts one of these moments.

Smalls: Some more of what?

Smalls: I haven't had anything yet, so how can I have some more of nothing?

Ham: You’re Killing Me Smalls! These are s'more's stuff! Alright now pay attention. First you take the graham, you stick the chocolate on the graham. Then you roast the 'mallow. When the 'mallows flaming... you stick it on the chocolate. Then cover with the other end. Then you scarf. Kind of messy, but good!

What a classic scene with some good old fashion summer fun!  Grab a smore and this t-shirt to have a great summer!

This t-shirt was discovered at SnorgTees.