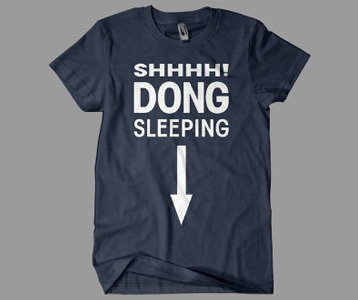 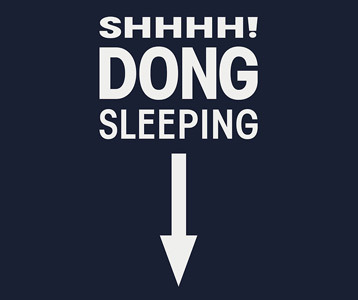 Today, I received an email asking if I could post Kumar’s Shhhh! Dong Sleeping t-shirt from A Very Harold and Kumar Christmas.  It was strange timing, because I just received the Blu-ray in the mail from Warner Bros. yesterday (we run DVD contests in the forums on our other site, ChasingtheFrog.com).  The humorous design literally pokes fun at the obvious.  Kumar Patel (Kal Penn) wears the shirt in the movie to help emphasize the fact that he’s still the same carefree jokester that he’s always been.  His friend Harold Lee (John Cho), on the other hand, is a successful Wall Street businessman who lives in a large house with his wife Maria (Paula Garces).  It is apparent early on that Harold and Kumar have become estranged in the six years since their escape from Guantanamo Bay.

After Kumar receives a letter addressed to Harold, he pays a visit to his former friend, only to burn down his Christmas tree in the process.  With Harold’s family, including his menacing father-in-law Carlos (Danny Trejo), at Christmas Eve mass, the two embark on an adventure to replace the tree originally given to them by Carlos.  This Shhhh! Dong Sleeping shirt can be used to commemorate their latest adventure or as a hilarious tee on its own.  If you missed the 3D theatrical release, not to worry, A Very Harold and Kumar Christmas will soon be able to spread hilarious holiday cheer at any time throughout the year.