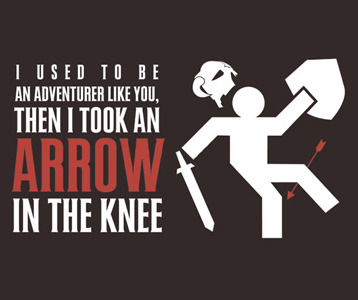 In November of 2011, the role-playing video game The Elder Scrolls V: Skyrim debuted and introduced gamers to the popular catchphrase, "I used to be an adventurer like you, then I took an arrow in the knee."  This Elder Scrolls V: Skyrim t-shirt displays the phrase along with one of the town guards taking an arrow in the knee.  The guards often repeat the phrase, among others, whenever you walk by them.  This repetition caused the phrase to catch on among gamers, who began posting it in forums and embedding it in humorous photos.  The subject of the catchphrase is often changed, replacing "adventurer" with everything that you can imagine.  In a very short time it went viral on the internet, appearing in photos, videos and on shirts like this one, which is a tribute to its origin.