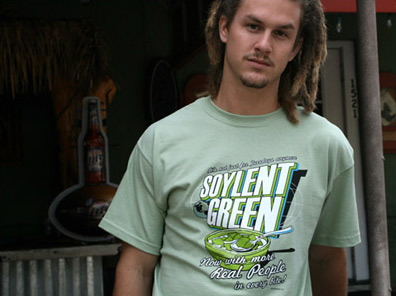 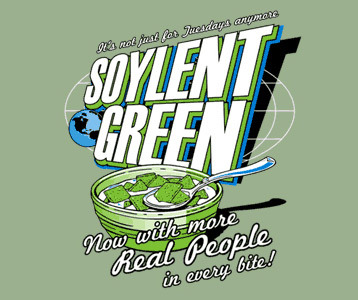 Charlton Heston is known for big movies and big lines, whether he’s kissing an ape, parting the Red Sea, or revealing the ingredients to a mysterious futuristic food that is being consumed by starving citizens.  It is the latter which he so memorably exposes in the 1973 science fiction movie Soylent Green.  If you’ve never seen the film, you might want to stop reading at this point, as this Soylent Green t-shirt reveals the ingredients of the tasty wafers that are given to the movie’s impoverished population.

The year is 2022.  The country is suffering from widespread unemployment, poverty and depleted resources, brought on by overpopulation.  Actual fruit, vegetables and meat are rare, and most of the world’s citizens survive on processed rations produced by the Soylent Corporation.  Their newest product is a green wafer that they advertise as being made from “high-energy plankton”.  The front of this Soylent Green tee advertises the wafer and its secret ingredient.

Charlton Heston portrays police detective Robert Thorn, who is investigating the murder of William R. Simonson (Joseph Cotton), a wealthy member of the Soylent Corporation.  Aided only by his aged partner and roommate, police researcher Sol Roth (Edward G. Robinson), Thorn begins to uncover clues that lead him to suspect the unimaginable.  With his own life in danger, his investigation eventually leads him to the corporation’s waste disposal plant, where he discovers the ominous reality of how the nutritious wafers are made.

Film buffs, Heston fanatics and fans of science fiction will love this Soylent Green t-shirt that promotes the energy-packed wafers by promising, “Now with more Real People in every bite!”  It’s not just for Tuesdays anymore. Now, you can enjoy the yummy protein-packed wafers every morning.  We’re just wondering if they stay crunchy in milk.