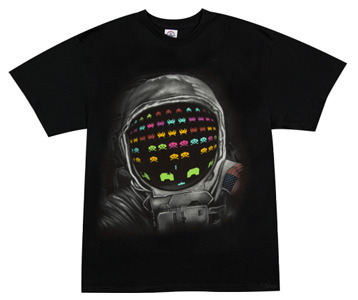 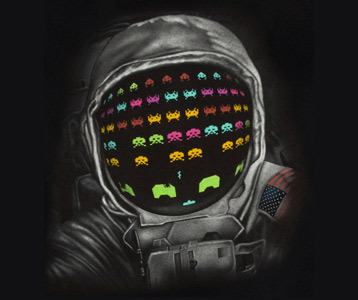 Released in 1978, the video game Space Invaders took the world by storm and was instrumental in helping to make the gaming industry more than just a passing fad.  This Space Invaders t-shirt features a reflection of the game’s aliens in an astronaut’s helmet.  It humorously helps to explain where the idea for the game came from.  In reality, the video game’s creator, Tomohiro Nishikado, drew inspiration from The War of the Worlds, Star Wars and the already popular game Breakout.  Shortly after its release, Space Invaders became so popular that it caused a shortage of 100-yen coins in Japan, and today its recognizable aliens are often used as a symbol for video gaming in general.  This Space Invaders Astronaut shirt is a unique tribute to the game and its lasting legacy.