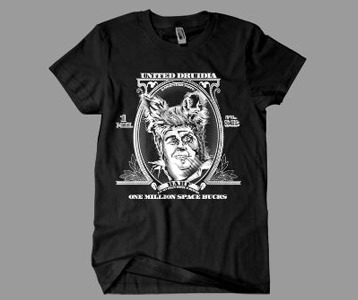 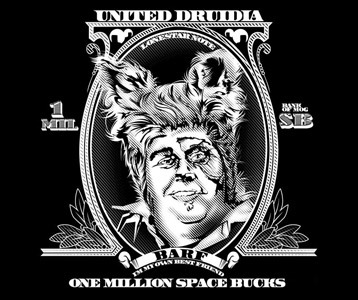 Mel Brooks 1987 science fiction comedy Spaceballs humorously features the late actor and comedian John Candy as a half man, half dog creature known as a mog.  The film itself is a spoof of several other sci-fi franchises, including Alien, Star Trek and most notably Star Wars.  This John Candy Spaceballs Barf shirt displays an image of Candy’s character on the front of a one million dollar space bill from the planet Druidia.  In the movie, Captain Lone Starr (Bill Pullman) and his sidekick Barf (full name Barfolomew), who were obviously meant to be parodies of Han Solo and Chewbacca from Star Wars, are in debt to Pizza the Hutt for one million space bucks.  In order to pay back what they owe, they hope to claim King Roland’s hefty reward for rescuing his daughter, Princess Vespa.  Wear this Barf John Candy t-shirt that displays an image of man’s real best friend.