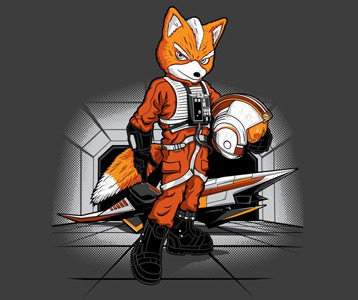 Much like Star Wars, the 1993 video game Star Fox found it's hero, Fox McCloud, battling evil forces in an attempt to defend his homeworld. Instead of Darth Vader, the evil forces in the video game were led by Andross, a villain with a similar lust for power. This Rebel Fox t-shirt features Fox McCloud with his Arwing behind him painted to look like an X-wing (notice the similarities). Star Fox was Nintendo's first game to use 3D polygon graphics. In order to render the advanced images, the game included the Super FX chip, a coprocessor that acted as a graphics accelerator. Get the Star Fox Star Wars shirt and let others know that you're not only a rebel, but you're also part of the Star Fox team.