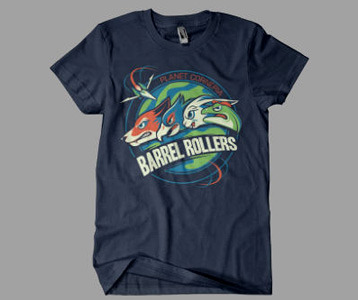 Released in 1993, the Nintendo video game Star Fox has always been a favorite of mine, in addition to its sequel Star Fox 64, which I discovered in the late 90s through an emulated PC version during college.  The game tells the story of a group of anthropomorphic animals, who are part of a rogue mercenary unit.  This Star Fox video game t-shirt features the unit’s members, including (in order from left to right) Fox McCloud, Falco Lombardi, Peppy Hare and Slippy Toad.  Each team member pilots an Arwing, a fighter spacecraft that they command in an effort to protect the Lylat system from the likes of the villain Andross and others.  "Barrel rollers" simply identifies them with relation to the popular Arwing maneuver that they use to avoid incoming fire, etc.

The Star Fox video game franchise was conceived by legendary Nintendo game designer and producer Shigeru Miyamoto.  His inspiration for the game came after visiting a shrine to a fox god who could fly.  To enter the shrine, Miyamoto had to pass through a series of arches.  This gave him the idea for the 3D style gameplay.  If you’re a fan of the video game series, this Star Fox t-shirt will inspire you to dust off your old controllers and take flight all over again.

This t-shirt was discovered at Fangamer.