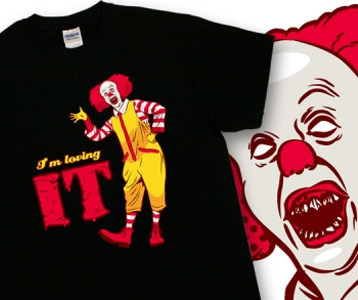 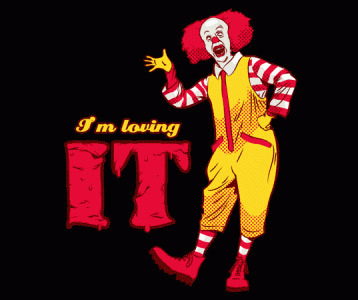 Based on the novel of the same name, Stephen King’s IT is a 1990 television miniseries that tells the story of an inter-dimensional being that can take on the form of what its victim fears the most.  This often results in the being taking on the form of a clown named “Pennywise the Dancing Clown”.  IT uses the seemingly friendly costume to bait children to kill them.  This Stephen King IT Movie t-shirt is a funny tribute to the Pennywise character, playing on the popular McDonald’s tagline, “I’m lovin’ it” and their well-known clown mascot Ronald McDonald.  Whether you like the evil character, or you consider yourself more in line with the outcasts who know how to destroy IT, this Pennywise tee is a must for fans.

This t-shirt was discovered at TShirtBordello.