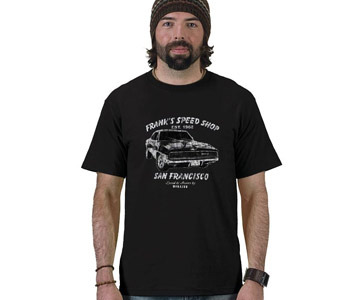 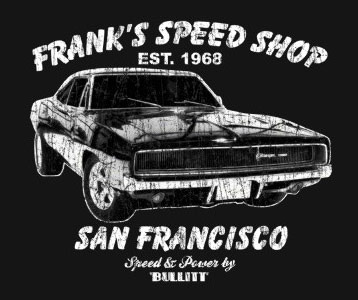 When people think of the 1968 Steve McQueen movie Bullitt, they usually first recall the film’s legendary car chase scene through the streets of San Francisco.  This Bullitt Steve McQueen t-shirt was inspired by that high-speed chase scene and features a well-rendered logo for Frank’s Speed Shop, established in 1968.  The logo incorporates Lieutenant Frank Bullitt’s (Steve McQueen) car, a 1968 390 CID V8 Ford Mustang, which is the car he uses to evade the two hitmen in the movie’s famous chase scene.

The scene itself lasts ten minutes and fifty-three seconds.  Two identical Ford Mustangs with modified engines, suspensions and brakes were used for the filming.  Actor Steve McQueen, an experienced driver himself, was behind the wheel for approximately 10% of the scene, mostly during the close-ups.  If you are a fan of this landmark car chase scene, this Steve McQueen Bullitt movie shirt will help you imagine yourself behind the wheel of his classic modified V8 Ford Mustang.