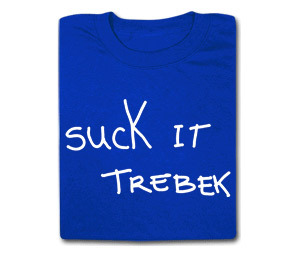 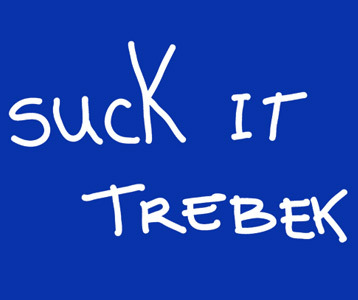 If you recognize the design on this tee, then you have seen and enjoyed the Celebrity Jeopardy! sketches on Saturday Night Live.  Will Ferrell portrays game show host Alex Trebek, whose guests include fellow SNL comedian Darrell Hammond as actor Sean Connery.  When I saw this Suck it Trebek t-shirt I couldn’t resist posting it.  It even inspired me to track down the SNL Celebrity Jeopardy skit on YouTube.

Just in case you can’t remember the details behind this particular graphic, let me set the scene…Alex Trebek (Will Ferrell) is at his podium and they are moving into Final Jeopardy.  After an agonizing round of Double Jeopardy during which he dealt with airhead French Stewart, troublemaker Burt Reynolds, who decided to change his name to Turd Ferguson, and record breaking (-$230,000) Sean Connery, Trebek decides to rip up the question card and make up his own.  Trying his hardest to make it as simple as possible, he says, “just write a number, any number, any number and you win,” and he even gives examples.  French manages to scribble down “Threve”, wagering $Texas while “Turd” doesn’t even bother to write anything.  That means if Sean wrote any number, he wins and to our surprise he did!  He wrote “V” and is given credit for its value as a Roman numeral.  When they reveal what he wagered, you see that the “V” is the top portion of a “K” in the phrase “Suck it Trebek”.  Sean got the last laugh after all and so did the viewers.

This Suck it Trebek t-shirt features his answer in full and will remind everyone of the inventive SNL Celebrity Jeopardy skit.  :::Cue Jeopardy Theme Song:::