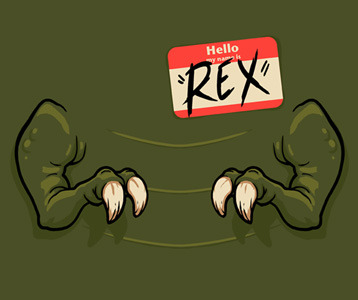 Whether you're looking for a new workout shirt to practice your push-ups in, or you like all things prehistoric and want a simple disguise, this Tyrannosaurus costume t-shirt is a fun way to let others know which dinosaur ruled the Earth, despite its small forelimbs.  Even though some people might make this predator the blunt of jokes today, the T-rex's forelimbs were powerful for their size and they were equipped with two clawed digits that could do plenty of damage. This T-rex costume t-shirt also features a name tag to let others know that you like to be called "Rex".