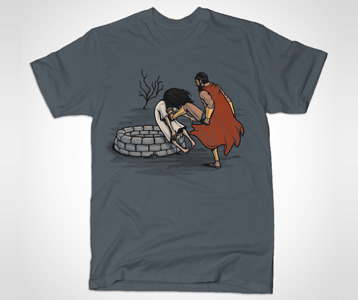 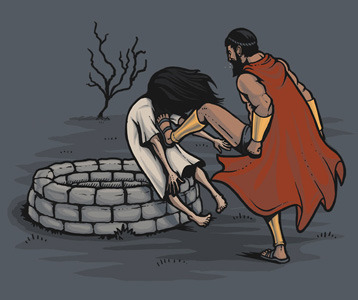 In preparing to write about this design, which parodies the disturbing horror movie The Ring and the swords and sandals battle flick 300, a strange static could suddenly be heard coming from my computer’s speakers.  Don’t worry, a decaying girl didn’t crawl out of my screen onto my desk, at least not yet anyway.  The Ring shirt featured here celebrates the 2002 US film that is based on Japan’s number one horror movie of all time, Ringu, and the 1991 novel of the same name.

It tells the story of a cursed videotape, which shortly after being viewed notifies the viewer with a phone call to tell them that they have seven days to live.  Eventually, the decaying, demonic manifestation of a deceased girl named Samara (Daveigh Chase) will find you and scare you to death, literally.  In the horror movie’s most memorable scene, a rotting Samara crawls out of the TV in Noah’s apartment.  He trips as he backs away, allowing Samara to expose her true face which kills him with fear, permanently distorting his own face as he dies.  If the Ringu horror movie or the US remake don’t scare you to death, The Ring Movie t-shirt displayed here might cause you to die from laughing.  It features 300's King Leonidas kicking Samara back into her well.