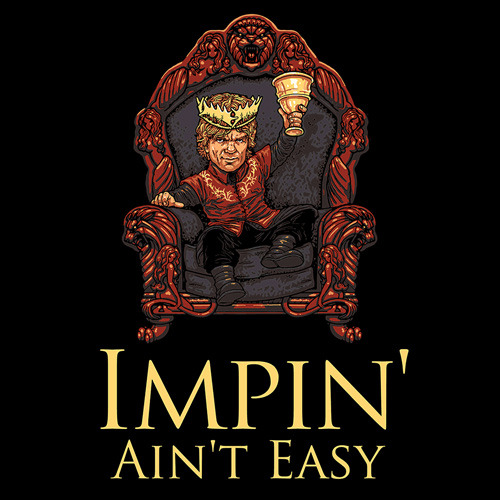 For Tyrion Lannister, life has been full of disappointment and shortcomings, and we’re not just referring to his height.  He has been looked down upon and bullied by his brother Jaime and his sister Cersei.  His father Tywin has seen him as an inadequate embarrassment to the family.  However, as this Game of Thrones Imp t-shirt indicates, things are starting to turn around for Tyrion.  Burying himself in books, he has gained an unmatched amount of wisdom and knowledge, something that nearly everyone around him lacks.  He utilizes his wit to outsmart his adversaries, which eventually helps him to stave off the invading forces and preserve his family’s hold on King’s Landing, the capital of the Seven Kingdom’s.  Tyrion’s wit, charm and wealth have also allowed him to become a bit of a ladies man, as this Game of Thrones Tyrion Impin’ Ain’t Easy shirt indicates.

This t-shirt was discovered at T-ShirtBordello.