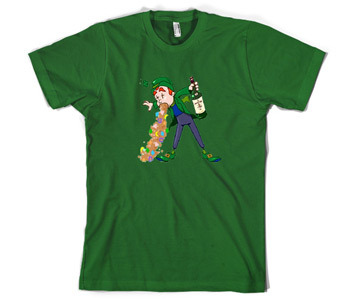 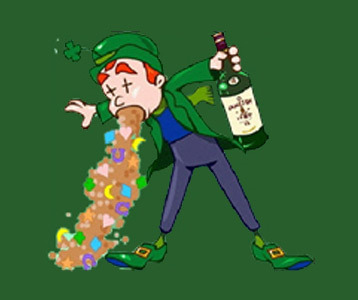 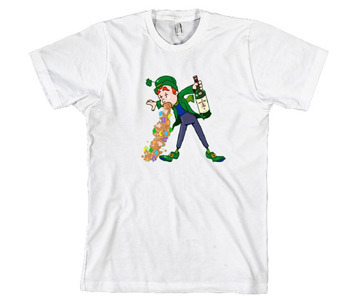 In 1964, the world was introduced to a new toasted oat-based cereal that included marshmallows in the form of pink hearts, yellow moons, orange stars, green clovers and eventually purple horseshoes.  To help promote the new cereal, a cartoon mascot named Lucky the Leprechaun was created.  This t-shirt displays the character holding a bottle of liquor.  At the same time, he is unable to hold down his charms and can be seen puking them up.  Combined with his puke are the marshmallow shapes that he has helped to make famous over the years.  Wear this Un-Lucky Charms shirt to the bar on St. Patrick’s Day and start the festivities off with a few laughs.  Interestingly, the cereal itself didn’t initially sell well until General Mills decided to sugar coat the cereal’s toasted oats.  Perhaps this was a bad idea, both health-wise and for the puking mascot on this Drunk Lucky the Leprechaun shirt.

This t-shirt was discovered at Crazy Dog T-Shirts.