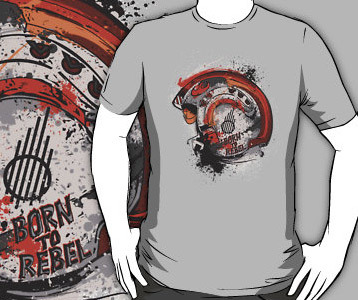 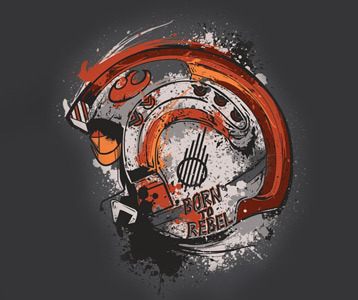 This Born to Rebel shirt features the familiar X-Wing pilot helmet worn by Luke Skywalker and seen first in 1977’s Star Wars: Episode IV – A New Hope.  The top of the fighter helmet in the design features the symbol for the Rebel Alliance, the faction that fought to restore the ways of the Old Republic.  Fittingly, the side of the X-Wing helmet displays the phrase “Born to Rebel”, which is a humorous parody of the phrase “Born to Kill” that appears on Joker’s (Matthew Modine) helmet in the Stanley Kubrick movie Full Metal Jacket.  It also appears on the movie’s theatrical poster.  Wear this Star Wars X-Wing helmet shirt the next time that you feel like rebelling, or joining the Rebel Alliance to fight alongside Luke Skywalker against the Galactic Empire.