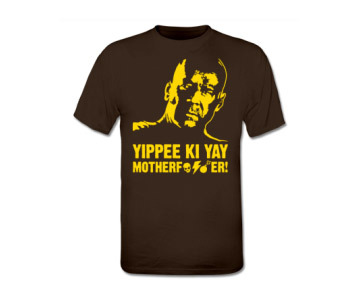 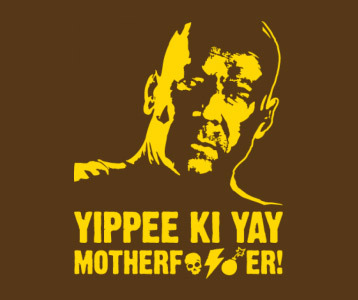 I can remember my mom taking my friends and me to see Die Hard when we were kids in the summer of 1988.  Back then, actor Bruce Willis was “that guy from Moonlighting” and not the big action star he is known as today.  That all changed with the release of the Die Hard movie and this Yippee Ki Yay shirt displays his most popular quote from the film.  In the movie, police officer John McClane (Bruce Willis) arrives at Nakatomi Plaza on Christmas Eve to reconcile with his estranged wife, who is there for a company Christmas party.  While he is changing his clothes, a group of armed men led by Hans Gruber (Alan Rickman) enter the lobby of the high-rise office building and take those at the party hostage, including McClane’s wife Holly (Bonnie Bedelia).  A barefoot McClane gets away and slowly begins to do battle with the criminals as he learns of their master plan to steal $640 million in bearer bonds from the company’s vault.  He delivers the quote on this Yippee Ki Yay Die Hard t-shirt in response to Hans Gruber asking him, “Do you really think you have a chance against us, Mr. Cowboy?”

This t-shirt was discovered at ShirtCity.